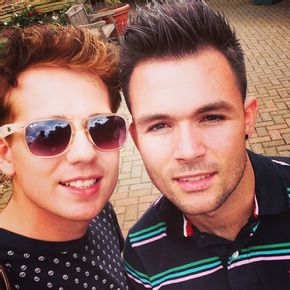 So, we have made it home and decided to do our usual pretend everything is absolutely fine and not mention the huge step that we have basically just decided to take. We make last minute plans to head out for dinner. The thought of talking anymore about the prospect of telling our parents was just too much to comprehend, as we were filled with a mixture of emotions. Are they going to be super happy and excited, or are they actually going to find it weird, especially as they already have proper blood related grandchildren.

We get to the restaurant; it was midweek and probably would be a bit quiet. We ask for a table in the corner, so we can talk about the whole idea of breaking the news to the potential new grandparents without the whole restaurant listening to our story. We are sure if we were sitting near people talking about this we would try and listen, but try and not look too obvious. We then ordered our food and that was our sign to start the serious conversation – so whose parents are we going to tell first and how? It very quickly worked itself out and we started to come up with a plan to tell Lew’s parents first, as they will probably be the easier pair to tell. Then based on how that goes, we will change the bits that didn’t go well and then tell Rich’s parents. Our worries then quickly changed from the adoption process and the excitement, to the massive worries of what if they think it’s a bad idea or don’t agree with what we are considering doing. I mean what are we actually going to do if this really doesn’t go how we hope? The time seemed to fly past so quickly and within no time at all we had finished our meal, were paying the bill and heading home, knowing that we were only a couple of days away from the weekend, where we were planning the big grandparent chats!

Saturday morning arrived in what felt like the blink of an eye, we were up and motivated, with positive vibes and excited to tell Lew’s parents at lunch time, about our future plans and how we really wanted to adopt some siblings through adoption. We didn’t seem to have any worries and just got ourselves ready and headed off to meet them, with a plan to have a normal chat and catch up first, before explaining that we wanted to tell them something important. Lew knocked and as his Mum opened the front door, he stepped in and the first thing that comes out of his mouth is “Mum, we are going to be adopting and we are going for siblings”. I mean, Lew doesn’t really like to follow the rules on stuff like this and he does get rather exited and caught up in the moment, and there it was, all out in the open. We spoke for hours about it all and what we had looked in to and how we had kept it a bit of a secret, to ensure that we knew we were certain on what we wanted to do and that we knew we wanted a family. All of our worries with telling them disappeared immediately, they were super supportive and wanted to be involved every step of the way from then on in.

One down and one to go, but we had to wait until the next day to tell Rich’s parents, so the anxious wait was about to start again.

We then get into the car to head home Lew’s excitement just pops right out again! “How about we just head to your Mum and Dad’s now? That way we have told both sets of grandparents all on the same day”. Clearly things had gone so well with the first chat, we were ready and excited to move onto the next one, so it would no longer be a secret and become a topic of conversation for everyone. We decide to drive straight to Rich’s parents’ house, this time for a bit of a surprise visit as they aren’t expecting us until tomorrow, so best hope nobody else is visiting them. We pull onto the drive and Rich’s Dad was just getting out of his car, it looked like he had just been out somewhere, so that meant no need for the nervous knock on the door, instead it was the banter of “aren’t you a day early”? We laughed it off and went in.

Having sat down for a cuppa, it wasn’t exactly bursting out of Rich’s mouth, so Lew prompted with a subtle “Rich haven’t you got something to say”. The usual first response from Rich’s Mum whenever mentioning something in this way is, OMG what’s wrong, what’s happened. We quickly settled them down and explained that we are going to be starting the adoption process and potentially looking for siblings. The conversation this time very quickly went onto talking about how hard it is being parents and do we really think we want to do it, sleepless nights and a massive responsibility, especially if we were going to adopt siblings. The exact sort of response we were expecting really, with the added comedy of Rich’s Mum going on to talk about how she really understands what we are considering, as she loves watching long lost families and always cries when she watches the show. It wasn’t really the correct comparison, but it was a totally relatable point so we went along with it and had a little laugh about how she has this in common with Rich, who cries at anything slightly emotional including X Factor auditions with a sob story.

The chat then became quite serious, with a focus on the real in depth considerations about the type of kids we would be looking for and whether it meant an older child could come into the family and how it might work or not work, as you always hear about the horror stories of adoptions that go wrong. We didn’t go into too much detail of what we were really thinking, but instead focussed on the facts of the process and that we only wanted to do this with them being involved with us all the way and to support us when we needed it. There was absolutely no question that they were going to do this, they were very excited that we were going to be starting the journey but, were probably not yet fully sold on the whole idea of how it might turn out. They were trying their best to be supportive, but a clear lack of understanding of what the adoption process really is, a lack of education or experience of same sex parents and ultimately worry and concern for us and the potential negative issues that we may encounter due to some people’s views, was what they really focussed on. Typical parents, looking to do their best for their kids and protect them from anything negative at all but the conversation rounded off really well with an element of excitement around what is to come.

We gave our hugs and kisses and headed off home, still feeling 100% certain on the fact that we would be looking to get that application done and sent off, but possibly now with a few more questions than answers. Overall, we have had a blast today, it has gone better than we could have ever imagined and we are now super excited to actually get the forms filled in, knowing we have the love and support of our families behind us.