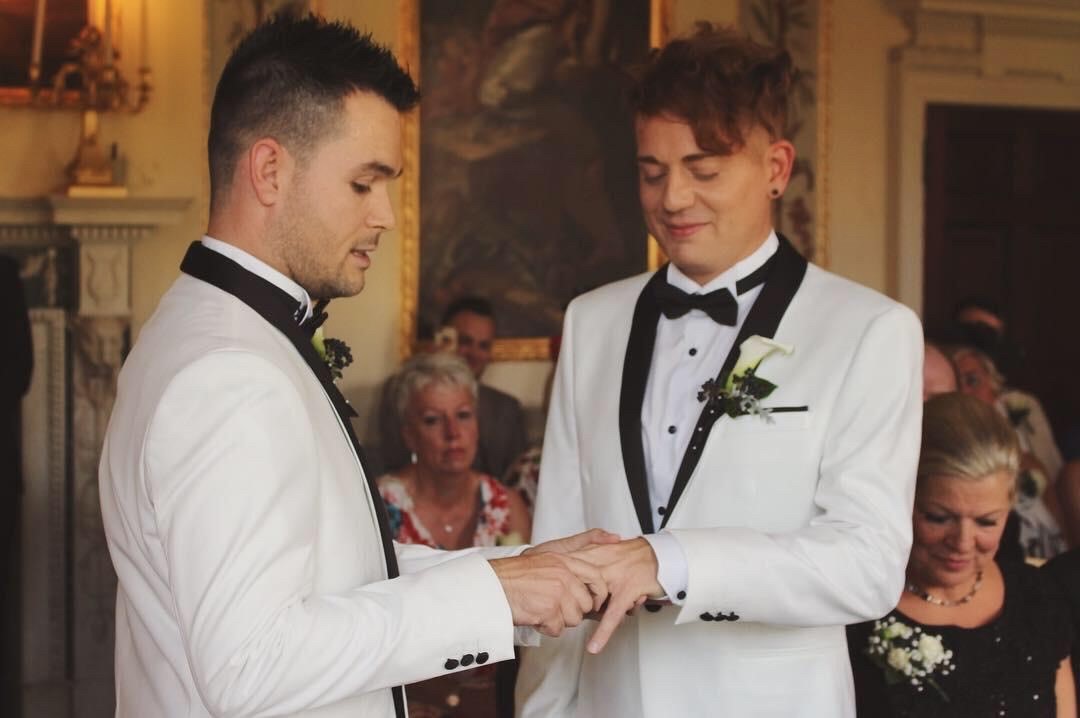 Being Gay Is Not An Option

I wasn’t sure how to explain my journey as a 34-year-old married gay man, with two children through adoption and living on the most part a completely carefree life in a short blog, because sometimes I feel so accepted in society, that it blinds me from seeing how difficult things can still be for our community. So, I’m going to try my best to open up a bit in this blog, in the hope that it may help someone reading it.

I grew up in south east London on a council estate, with my Mum, Dad and two sisters (me being the oldest) and can honestly say I have great memories of my upbringing and childhood life. There was always something in the back of my mind telling me that I fancied boys rather than girls, but with my Dad being a professional boxer, me being a really keen young footballer and on the outside being what people would describe as a ‘typical young lad’, it just wasn’t an option to allow these thoughts to become anything other than just thoughts in the back of my mind.

I don’t feel bad about this, as that was my normal at the time and has led me to where I am now. As I say, I really did enjoy my childhood, my teen years and early adult life but for a very long time, I had to pretend that in the situation of relationships, I was someone else.

For the purpose of this blog post not being a novel, I will now fast forward through childhood, teenage years and arrive at me as a 23-year-old, having been in numerous relationships with girls, desperately trying to make them work but always knowing deep down that it was just never going to make me happy. It was at this point in my life that I realised that ‘being Gay is not an option’ and that if I wanted to be truly happy, meet someone who I love and have them love me back, then I had to start being honest with myself and everyone else.

I started to go out and date in secret, which felt like I was living a double life for some time but now I just feel it was my transition into acceptance of me. Luckily enough, I met my now-husband Lewis in a pub. I gave him my number on a piece of paper at the bar without anyone I was with knowing, as I wasn’t out as gay at the time and two days later, he texts me (yes, I know he kept me waiting) and that is where life as the complete me truly began.

After months of dating, we both knew that we couldn’t go any further with our relationship while it was still a secret. So, I built up the courage to finally tell my family and closest friends, which sounds easy but I’m not sure that anyone truly understands the worry and anxious feeling that this creates.

Coming out to my family and friends

The build-up to telling the people you love the most was worrying and lonely, and I went through stages of genuinely believing that I would lose everyone. It may be completely irrational thinking, but we have all heard the stories of people being disowned due to being LGBTQ+ and as much as I didn’t want to believe this would happen to me, I had to make sure I was prepared for the worst-case scenario.

The moment of telling them was the scariest thing I have ever done. There was a couple of weeks of trying to understand it, with questions from my closest family members like “are you sure?” or “has something happened?” but it wasn’t very long before everyone got their head around things and very quickly, I felt completely accepted and feel lucky that I only ever received positive support.

Realising something was missing

Time to fast forward again, me and Lewis spent the next couple of years doing what young couples do, having lots of fun, making memories, enjoying lots of holidays and buying our first home together, but there was something missing.

The thing we were missing was the need to want to have a normal family life, which both of us were used to. As individuals, we both always knew that we wanted to be parents, but as younger adults we never truly believed it was possible. We certainly never imagined it would happen, which is why we probably never spoke about the idea of whether we would want kids in the future seriously.

We had always joked about having kids from early on in our relationship with that sort of awkward laugh together – that was secretly our way of building up to the real and important conversation of ‘do you actually want kids?’. Two years into our relationship, we had this very conversation and the short and simple answer from both of us was yes of course, we would love to have kids of our own but were worried about how easy or not this may be.

Being a Two Dad family, the options for us to start a family were limited. In some ways, this may have helped make the decision a little easier for us on how to go about it, as the options were adoption or surrogacy. Our decision was based on two things: one that we wanted to be completely equal as parents and not have one being biologically related and the other one not, and two we knew there were so many wonderful children in care who need a family to love them and we knew we had more than enough love to share. So that was it, the decision was made, adoption was the way forward for us and so we started to attend adoption events.

We knew just how full on the whole adoption process would be, so we knew we had to tell our closest family and friends to get their support early on. Up until this point, it had just been the two of us knowing about this whole idea of starting a family. I think both sets of our parents had written off the idea of grandchildren from us, but things are so different now and we were so excited to tell them but also extremely nervous at the same time.

The worry of the people who are the closest to us, potentially not agreeing with the idea of a Two Dad family could have gone horribly wrong and we went through periods of considering not putting ourselves or our families through it, but the want to be parents outweighed the worry, so we went for it and told our parents who were all so supportive and that is where the journey to our family began.

I promise this will now be the last fast forward of this blog, as it brings me to today, where I am happier than ever before in being me. I have a gorgeous husband, the most amazing son, a little princess for a daughter and our family dog Belle, the crazy cockapoo, which basically means I really do have it all.

I feel so lucky to be in this position thanks to the work done by all of the LGBTQ+ community and allies out there, who have often had to really fight hard for things to change, which is why it is so important to remember the history behind why I feel like we are a normal family, just like any other family out there. I mean what is normal anyway 😊

🥳 HAPPY BIRTHDAY LEW 🥳 I want to wish the m

❤️ Hand in Hand Through Life ❤️ It’s be

Which one are you????? The simple things in life

👑 The World’s Grandmother 👑 Today is such

Love makes a Family ❤️ Nothing else to say ot

🧜‍♀️ Our Little Mermaid 🧜‍♀️ I

💔 Our Hearts Are Broken 💔 As a family we ha

👨‍👨‍👧‍👦 Brave Faces For The Kids

The Next Chapter…. So tomorrow the girly starts

💙 Missing My Besties 💖 Well as much as this

📚 This was a perfect moment 📚 Today was our