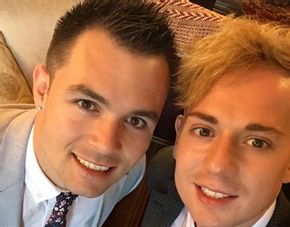 It’s now the night before our first ever adoption event that we have planned to attend and to say we are both quite nervous is an understatement. Even though we both know we are not going there to collect a child and bring them home, it’s still an odd feeling. The mood in our flat is something hard to describe, not a negative feeling but more anxious of what people might think of us and how we are going to feel when we get there. We opted to get a takeaway in for the evening and just chill indoors, talking about what we would eventually love as a family and thinking of all the positive things that having children can lead to, before heading to bed early to be fresh for the big day tomorrow.

We’ve woken up and the anxiousness seems to have disappeared and we are both super excited to get there and get this show on the road, but haven’t yet said a word about adoption or having a family. It’s become the weird elephant in the room, that we both know is going to be huge this afternoon but we will just avoid talking about it until we are there. We decided to go for the formal office look, in fact we possibly both look as if we are going to job interview as opposed to a relaxed event for potential same sex parents to adopt. We head off to the station and begin our journey to the event, which wasn’t very far and probably helped as we remained pretty much silent all the way. But we are now outside the entrance and that’s it, we are going in.

As we walk through the door the first thought that came to mind was, I think we are a little overdressed for this. The place was huge, there was stall after stall of social workers, basically doing their best attempt at being a market trader, but instead of selling products they were trying to get you to register and hand over all of your contact details to arrange a visit from a social worker. It felt like we were at our first ever swimming lesson and being told to jump head first into the deep end, but at least nobody mentioned that we really didn’t need to be as dressed up for the occasion.

Moving round what feels like a sales exhibition, it was clear that we had not done enough research about the event itself, but this was a great start. It did prove to us one thing, we felt so excited about the whole prospect of having children and this day has definitely made up our mind that we are absolutely proceeding further on this journey. It’s no longer just a fairy tale, this is something we think we can have and if we can then we absolutely want it. Now we have taken as many leaflets as we could and given our contact details to a few agencies, we decided it was time to make a move and head to the Nando’s we saw on route for some food and time to debrief. While we ate our food you could tell there was such a different energy and childish excitement, as if we had just booked a luxury holiday abroad and started to talk about how lovely it would be, except in our case it was the whole idea of being parents and how we would love to grow old together and have our grandchildren over.

So, we are now a week on and are on our way to our second meeting at a local council’s offices, as opposed to the separate agencies that work with councils that we saw at the event a week ago. We might add that this time we are much more casual and basically are going just as ourselves, not trying to be all pretentious and over the top. On arrival, we were ushered through from reception to the large meeting room and greeted personally with the offer tea of coffee. We already feel so much more at ease and started with a brief introduction just about ourselves on a one to one basis with a social worker, before the formal part of the introduction event even started. The introduction presentation was delivered by the actual social workers who work in the adoption team for the specific council and sometimes you just get that feeling about people, well we got that. It was now time to leave, without looking to eager we took a form and acted like we need to think about it further, but of course our decision was already made and we would be starting to complete this the minute we step outside of the building.

We get into the car and that feeling of realisation hits, we are actually going to be doing this but how are we going to tell everyone or do we even just keep it all to ourselves, when a key part of the session we just heard was all about having a positive support network around us. It’s now time to think about not just the formal process, but what other things there are to consider, as we know this is going to be a journey of emotions and the main people, we would need around us are family and close friends. It felt like planning how Rich was going to come out as gay all over again.