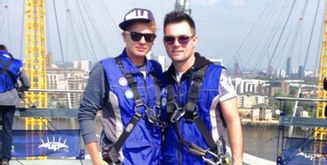 Chapter 4: OMG we have applied

So, it’s Sunday morning and we are up early, we have planned to complete the registration of interest form today, which is the application form to submit your interest in being considered to start the adoption process with a particular council or agency. It turns out that this is not an actual form that starts the process. It is in fact, a pre-application form. A bit like arranging a meeting with the bank, to discuss the potential of opening a bank account, knowing deep down that there is a slight chance that they may say no when you actually get there. Meaning that it is even more important to get right, so we have our special neat handwriting pen and mobile phones with its spell checker at the ready, just in case. Surely, they wouldn’t stop us from adopting due to rough handwriting or spelling mistakes? Hey, let’s not take any chances on them being able to judge us already.

We are now sat at the table with our tea and toast, ready for what is no doubt going to be a really serious session of form filling, but the main thing we are both so confused about is how short and basic the form really is. It is not asking for very much detail at all, it’s basically a factual form of our details, with a couple of questions about why we would like to adopt. Do we have the wrong forms or is this going to be a straightforward process after all, or even worse, is this them getting us into a false sense of hope and then hitting us later with the much harder stuff to see how we manage. After all, this is what everyone tells us being a parent is like, a total rollercoaster that you would never want to get off but would advise people carefully about actually getting on in the first place. Maybe this is why they want us to complete a basic form, with an option to bail before actually getting too far into the process.

Completing pages one to five has been so simple, possibly too simple, but we have now reached page 6 which is asking for referees from employers, family members and friends. The reason for this is so the assessing social worker can arrange to meet with them to discuss our application and whether we would be good parents. I mean we haven’t even told our employers that we are thinking about adopting, let alone telling them that social services are going to write to them and ask for a reference about our suitability to actually look after kids. All was going so simple until this damn page! – let’s hope there aren’t any other shockers on the rest of the form. The form filling now turns to a bit of a negotiation session between us, to decide who is going to put certain friends as their personal referees and who isn’t. This opens up another can of worms really, as what about our close friends that we don’t ask to be referees, how are they going to take this and are they going to feel like they are of lesser value as friends or that they are excluded from the process, as we certainly wouldn’t want that at all, such a lot to consider.

Okay, so the application form is now completed and we have agreed on who is going to be our referees and who is going to have who. We now just need to tell them all, including our employers, oh my god! I am sure it will be much easier than telling our parents, but also sure there will be quite a bit more banter involved with our friends and certainly some rather awkward conversations with our employers. We need to remember though, that this is no different to anyone else who wants to start a family, they would all have to discuss with their family, friends and employers too. We aren’t any different and we need to remind ourselves of that throughout this whole process. Whether you have children naturally or adopt there are lots of hurdles to consider and decide on.

We can now do no more on the forms, have kept it extremely neat and no spelling mistakes, so we upload the form and email it over to the adoption team at around 11pm that evening so we know they will not see it until at least tomorrow.

Well, it couldn’t have been any later than 10am on Monday morning and the phone rings, which is clearly the number from the area of the adoption agency we had chosen. Did we not do this properly? Have we made a mistake? These were the first thoughts running through my head. So, I answered the call and it was indeed the lady from the adoption agency that we met at the open event and she thanked me for sending the forms over so well completed. She then went on to say that she wanted to arrange a date for her and another assessing social worker to visit us, to decide on whether they would be allowing us to proceed with starting the adoption process with them. How I didn’t pass out at the time or do something silly like swearing in all the excitement I do not know, but instead I kept calm, confirmed a time and date for the following week and put the phone down. I now call Lew, to say “I have just had a call from the adoption agency, can you believe it! They are happy with the forms and are coming to see us this time next week” and Lew replied “oh my god we are going to be parents”. It felt like we should have been embracing in an excited hug but instead are both feeling super happy at the prospect of what is to come, but at the time scared to death at the thought of them coming to see us formally. We wished away the rest of the day to get home from work and have that hug.

How the hell do we prepare for this? I mean, we don’t know anyone who has adopted or been adopted, so looks like we are going to have to wing it, so bring on next week…