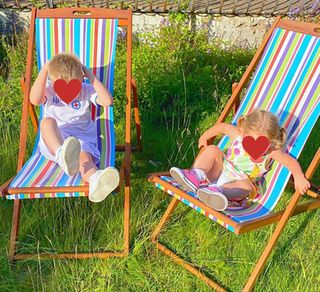 The Boy and The Girly – Why?

Well this is probably the most asked question we get “why do you not use their names” or “why do you call them boy and girly” and yes we have even been asked “have you really called your kids Boy and Girly” which is always one that makes us laugh. We may sometimes come across as a little bit crazy on our videos and stuff, but surely you wouldn’t think we were that crazy, so we wanted to put pen to paper and explain our thoughts on the subject.

When we first started our Instagram account back in February 2019, we really didn’t imagine it would take off in the way that it did and never really thought we would need to worry much about the kids identities, especially as initially Rich wasn’t a fan of the idea of being on social media, compared to now where he thinks he is the new king of the coffee dances. But it didn’t just fizzle out like we imagined, it has grown into this amazing network of people who are just so supportive of our little family and for that reason we wanted to allow the kids to show their own little personalities and traits, while still keeping them as protected as we possibly can from what can at times be the crazy world of the internet.

We had so many chats about what we could and how we could let them have their own identities on social media without actually naming them or really showing their faces and after much debate, some late night conversations and a few little disagreements on the best way to do it, we like always as a team decided that it was best to keep it simple and not overthink it, which is how we came up with ‘The Boy’ and ‘The Girly’ which we feel really works. It doesn’t expose them for all to see but yet it allows us to talk about them in an open way, while people watching can relate to them as their individual personas through their internet names as ‘The Boy’ and ‘The Girl’.

Obviously, it would have just been much easier to use their actual names, which we would like to add are both beautiful and suit them both really well but as they are their original names given to them at birth it’s not a good idea. You are taught quite a lot about the importance of names when going through the adoption process, with the main thing being about how important it is to keep their names because it is part of their identity since birth but also about how you need to be sensible online with the use of their names and faces to ensure they are protected, avoiding any potential issues with birth families.

Every adoption story is different in terms of the potential ongoing risk to the children, where some will have little to no risk at all but unfortunately sometimes the risk level can be high and pose significant concerns if their identities are revealed. It is really lovely for some adoptive parents to be able to share their children’s names, face and everything and sometimes we wish were that brave too but we are quite anxious people when it comes to any sort of risk taking. If anything negative were too happen then we would forever blame ourselves for that decision, so it’s just easier to keep it as it and not put the kids out there but we completely support those families that do make this decision, as remember every family is different and only they will truly know the full story and what is best for them.

Showing the kids faces is something that we would probably both find a bit easier than releasing their names, as they were both so young when we adopted them and to be honest they don’t look anything like they did as babies now and would be unrecognisable but at the same time there are so many technical enhancements that you never know what is possible these days from a photo posted on social media, so again we have decided against this. Our fall back position on the decisions around the children are always back up by a little saying we heard a long time ago when going through our first adoption process and that is “if the children are not able to fully understand why their face is hidden or their name isn’t told, then they are not able to fully understand the consequences of showing them”. When they are both old enough and can decide for themselves, then we will let them make the decision and support them with it but I think we probably already know that there probably isn’t a teenager in the land now that doesn’t have some form of social media, so we will just end up being those annoying parents continuously asking them what they are doing and reminding them to stay safe.

Another question that we are asked quite a lot and has actually come up a few times at home already is “why do I not show my face” and for us this is a very simple answer. We explain that there are lots of strangers on the internet and just like you shouldn’t talk to strangers when we are out, children also shouldn’t speak to strangers on the internet, well certainly not at the age of just turned five and two. It has also really helped us with our explaining of the whole stranger danger thing to the boy, which is something that is normally quite a hard subject to get started but for us it’s easy as we compare straight away to when we don’t show his face. The one thing these two will probably cringe at when they get a bit older, is the abundance of photos of them both and the rest of our family around the house, which is why you will have probably noticed that we mostly only have videos in our kitchen or garden for social media.

The one thing that we really feel is the most important, more important than the sharing or any names or faces, is that the first people we ever tell the actual story of the kid’s adoption story will be the Boy and Girly themselves. We do not think it would be fair or right to let them hear or see anything personal about their own stories, before they properly understand it all for themselves. It would be then completely down to them on whether they want to share their own personal adoption stories in detail or even at all with anyone.

Both the Boy and the Girly know they are adopted as we continuously explain to them about their birth families and use their life story books to help them understand, with age appropriate wording and pictures as they are both still very young. We also have a later life letter for both of them, which will give to them when the time is right and this will go into more detail about what happened and explain why they were adopted in the first place. Being a part of a Two Dad family ensures that it will never be a secret that they were adopted, as clearly neither of us actually gave birth to them and they will realise that soon enough for themselves, even if most of the time we both often forget that they are actually adopted, as we just see them and love them as they are, our very lovely Son and Daughter.

So, to sum up our explanation of why you all know our kids as the Boy and the Girly, it’s a completely selfish decision that we made at the very beginning for us to protect them as much as we can for as long as we can and like every parent out there, we will do this for our children forever. They are both so happy, so loving and genuinely doing so well in everything they do and make us feel proud to be their Dad and Daddy every single day. But we do know that they have some very difficult times to come in the future to deal with, when they properly find out and understand the fact that they are adopted and come to terms with what it means to them. It’s a stage in their lives that we have always know will come and they will need us even more then, than they have ever done before and we are hoping that these decisions we have made so far to protect them will pay off in the long run.

We would be completely lying if we said that we were not both dreading the day when they actually find out and I think deep down every adoptive parent has some worry about this moment, the worry of rejection and the worry of seeing your child upset and not being able to just solve the problem. The very thought of this time in the future fills us both with nervousness and an anxiety level that is very hard to explain. If you have taken the time to read this, then thank you and we hope that this somehow helps you to understand our decision to keep them private, but for now we will just continue to enjoy them growing up and create more very special memories along the way.