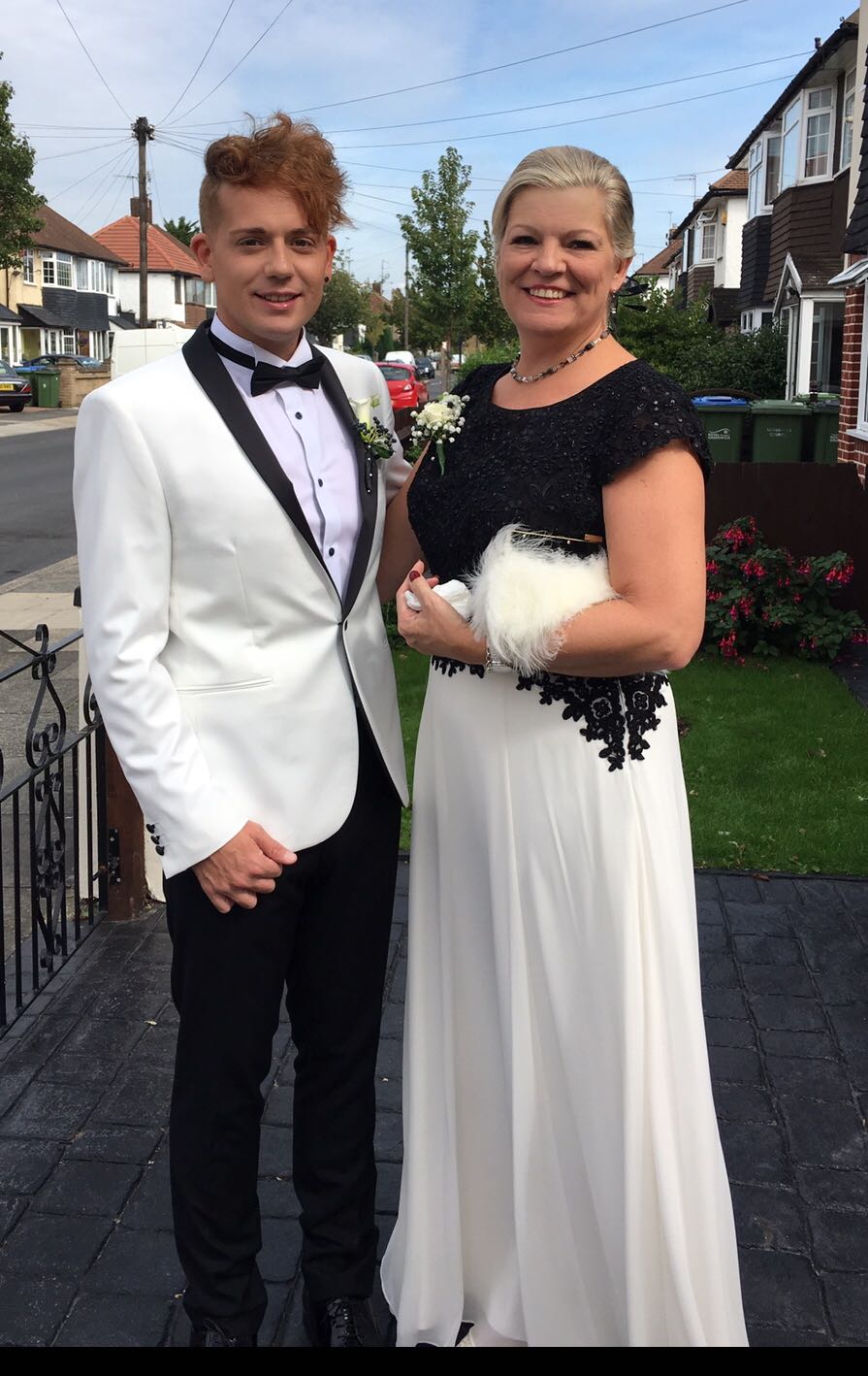 The year 2000 was a very important year in our house, even though from a young age inside I already knew, it was the first time that Lewis and I discussed his sexuality. It was a day that I always knew would come and when it did, there were a lot of tears on his part, but for me it was a great day as he finally opened up to me as his Mum and we could discuss all his fears and worries. The comments he made through the tears were things like, are you upset, do you still like me and why was I born this way. He then went on to explain that he would never get married, he would never have children and would never make me a Grandma, which I knew was something that was clearly bothering him. All of these worries just poured out of him and it was a very emotional day, for the both of us. In reality, to our family it was not a problem at all, Lewis was embraced with open arms by everyone and nothing really changed, he was just Lewis, the Son, Brother, Grandson and Nephew growing up and getting on with his life just like everyone else in the family. He was assured that he was loved and no-one in the family would think of him any different and they didn’t.

He carried on with his life, growing up as any other young man would, knowing that I was always there for him no matter what, even if sometimes on the other side of the world due to his work, in a totally different part of the country or just upstairs in his bedroom. One night though, Lewis came home and said that he had met someone and that this person was very special and that he would like me to meet him. I was quite excited, as this hadn’t really happened before, well not properly where I felt like he really meant it. So it was arranged that I would meet Rich, one lunchtime with Lewis for a very brief time just to say hello while they were out and about at a local shopping centre. Little did I know then that this was the beginning of a world that we had talked about, but never really thought would happen.

Eventually Lew said that he was going to move in with Rich and that they were committed to each other and I was so pleased that he had found someone to be with, make memories with and have a future that wasn’t on his own. A couple of years later after all the fun and holidays, Lew came to see me one night again, he said he had something to say and that I must not tell everyone (I thought it was that he was going to marry Rich), he thinks I can’t keep a secret so I was sworn to secrecy before he would explain anymore. It was then that he told me that him and Rich had been finding out a lot of information about adoption and that they had decided that they were going to go forward and hopefully adopt a child. Well I could have burst inside with excitement but took a breath and listened to all the things he told me. He told me about all the classes they needed to attend and workshops that you need to go on, the various panels to be approved and that it was a very long process. I suppose if you have never known about adoption you do not think or know about the process, which I certainly didn’t. It all sounded very complicated and so the excitement suppressed and I thought although this is something as a family Lew and I had dreamt of, it was now that he needed my support more than ever. They had to give references of friends that would support them and also Richard’s mother and I were classed as the main support people and it may be that we would need to be interviewed!

Off Rich and Lew used to go, to this meeting, this workshop and Lewis now had a big folder he was collating everything in and it seemed to take forever. Finally, the day came when they said that they had “their panel” day. This is when we would find out if they had been approved to become adopters. This was a funny day as I felt excited and a bit sick, what if they were not approved, what if they were, what does it mean. But finally, I got the phone call to say yes that they were approved. I tried to understand this in regular terms and I got my head around it by thinking that “they were trying for a baby or maybe that they are pregnant and we are waiting for the baby to come at some point”. I started to crochet a cot blanket, I knew they wanted a boy so I picked a beige colour wool and crocheted away.

Time went on, it had been a bit frustrating as you are just waiting for a call, but finally Lew and Rich said that they had been sent details of a little boy and that he was gorgeous and that they were meeting with the social workers and their social worker to look into it further. From a Grandmothers point of view, when your daughter or son say that they are having a baby, you know you have nine months to wait and then if all goes well you have a grandchild at the end of the process. With adoption, your son tells you they want a child, then they go through a massive process, then have to be approved, after which at some point they are shown details of a child, then they decide to go ahead but then there is no pregnancy, it is all in the hands of the two lots of social workers, the courts and the panels. It is very exciting yet very unsettling in a way. I made sure that I never showed Lewis any of my worries about it all for him and just continued to be the most supportive Mum that I could be. Well this little boy that they have decided to proceed with is going ahead, they like the detail about him and the social workers seemed to like the details about them, but I am not allowed to see any of this and I am only told he has big eyes. The day comes when they have to attend a “matching panel” to see if they are suitable to adopt this “big eyed, blonde boy of 8 months old”.

The matching panel day came and to the joy of everyone, especially Lewis and Rich, they were approved to go forward to the next stage of matching with the boy. How exciting but how frustrating as I could not meet him! However, in between the time of matching and them meeting with the boy they have to send items for the boy from them, to get used to and photos of themselves etc and I was very proud to be told that the crochet blanket had been sent for him and he would bring it home with him when he came to live with them. After matching panel there was more time waiting for the introduction and handover for Lewis and Rich. More waiting then to find out when they will meet him, as this process takes a week or so. More waiting until they finally bring him home, and then, they have “alone time” to bond, so I still could not see him! I was at the point of climbing through the window at night to have a peek when I finally got the call and was invited to go around to Rich and Lew’s home to meet the boy.

The day had finally come, I was up and ready and chomping at the bit to get going but had to wait for the call to say they were ready. Finally I arrived at their door and rang the bell and went in to meet my new Grandson. I can say that he was certainly worth the wait, he was the most adorable, now 10-month-old that you could imagine. I wanted to swoop in and hug him with all my heart but I had been warned to let him come to me and not to overpower him. We played on the floor for a while and all went well and I felt so happy inside for Lewis and Rich as they looked on proud that I was there playing with their son.

Looking back now, those days seem so long ago, when I see my grandson now there are no worries about hugging, in fact his hugs are so strong they nearly knock you over! I have other grandchildren but “the boy” is not treated any different to the others, they all get told off and all get their cuddles just the same. But with the boy, sometimes you get the odd question of “are you adopted Grandma?” or “who is your Mummy”, and all I do is explain and tell him the truth and tell him that he is special, as he has two Dads who love him very much (and a crochet blanket that goes everywhere).

From a Grandmothers view on adoption, it is a different way of going through grandparent-hood compared to “the normal” but it was just as exciting, terrifying, wonderful and rewarding in every way.