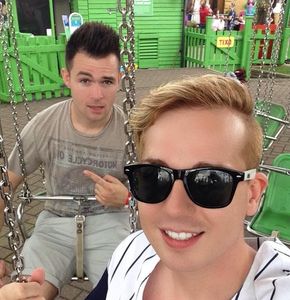 Chapter 25 – The day we have always wished for, a child of our own

We are up early and ready for today but cannot believe we need to wait until 2pm, before we finally get to meet him. We haven’t really slept at all last night, mainly due to thinking about the day. I guess it’s like a kid at Christmas, where they cannot sleep because they are so excited about the next day. As we are up so early, we decide to pop out to the local shops for a coffee and browse around the shops, basically trying to get the time moving along quicker. While walking around the shops we come across as toy shop, that is a shop we would normally walk past without a second thought, but today we are feeling like we need to go in and buy something. We have a little debate over this little dog teddy that talks and sings, with a light up heart, as we know it’s a lovely toy for him but don’t want to offend Sally when we know she probably has loads of toys for him already. We decide to buy the toy and take the chance, as Sally seemed so lovely when we have met her and will no doubt just go along with it. I mean we cannot meet our son for the first time and look like we haven’t got him anything. Having purchased the first ever toy for our boy, we are done at the shops and head home to get ready for the big meeting this afternoon.

It’s about two hours before we need to leave, so Richard jumps in the shower as he literally takes forever to get ready. I cannot understand why though, as all he ever does is put his deodorant on, get dressed, put wax in his hair and job done. I’m not sure this is something I am ever going to work out, so instead I always make sure he is the one in the shower first. Both all washed and ready to go, dressed in our usual casual clothes, to try and let him see us as we were in the photos that Sally has been showing him, hoping it will help him recognise us and link it all together. The one thing that we hope he cannot tell about us today, is the fact that we are both just so nervous, I mean just by looking at us you can just tell that we have that anxious look about us. Putting all the anxious feelings to one side, we head out of the door, lock up and officially start our journey to meet our son face to face for the very first time. The drive there feels very tense, I mean we usually have so much to say and we have so much to talk about with the excitement of seeing our boy but the importance of this meeting has led to quite a few weird thoughtful silences on the way. As we arrive, we remember that we need to park in the street adjacent to the foster carer Sally’s house, as she doesn’t have a drive, which is probably handy as we are like 20 minutes early. As much as we want to go and knock on the door right now, we know this is probably not the right thing to do and decide to wait it out. We really want to set the right impression and get off to a good start, as we will be here everyday for longer and longer each day over the next ten days of the introduction period.

With five minutes still to go Rich says “that’s it, we are not waiting anymore, let’s go” and opens his car door like he means business, so I follow suit and we are off. We are now walking what is the most important few yards in our lives so far and probably the most important steps we will ever take, as when we get the front door and knock, we know there will be no turning back and our lives are going to change forever. The thought of this doesn’t bother us at all, in fact we are so ready for this that we walk with an excited bounce in our step and Rich gives me a very cute little arm around the shoulder moment “here we go babe, let’s meet our son” and we knock on the door. Sally opens the door with a smile “come in, he’s all ready for you” and calls his name “your Daddies are here”. We walk into the living room and there he is, crawling around on the floor with a little cuddly toy. My heart is beating faster than I ever thought possible, that’s my son right there, what should I do now, I have frozen solid, this is exactly what I was worried about. But Rich goes straight in and gets down on the floor with him “hello mate, what you playing” in a very kid friendly tone, it was like all of a sudden, he was an expert in talking to kids. It was at that very moment that my heart filled with joy and the butterflies started to fly in my stomach like never before, as it was so obvious by our little boy’s face that he could recognise his voice and possible even what he looked like due to possibly the talking photo album. I now need to man up and get in on the action, so get down with the two of them and ‘yes he knows me too’, I just cannot quite believe it. I do not have the words to explain this feeling, it is like some sort of special love at first sight connection that you read about and never really know if it happens. Sally then shouts from the other side of the room, as it was an open plan kitchen living area “I’ve put the kettle on, but Lewis get in there, as you only have half an hour today remember”. So, I go in for the kill and hold his hand to help him over to the toys on the other sofa, but instead of him going he decides to sit on my lap and wait for me to reach for the toys for him. Rich laughs and says to Sally “he’s got him wrapped round his little finger already”.

The last half an hour has really flown by, we have literally spent the whole time down on the floor with him dedicating the whole time to play and fun. He seems to have really enjoyed it and we haven’t had any tears at all, which is something we was so worried about but there is still time, so don’t want to jinx ourselves now. I cannot believe how well Rich and him have hit it off, the only way to describe it is to say “they have just clicked” like a perfect match. In such a short time with him, I can so tell that he is going to be a very boisterous boy, which is literally everything that Rich could have wished for. Sally then says “okay guys, it’s time to say bye bye until tomorrow” so we both look up and agree, like good school children would do to their teacher. Even though, in reality we totally wanted to stay with him forever. As we get up and start to get our things together, Sally says “pick him up, give me your phone and smile together for your first ever family photo”. How could we turn this down, what a lovely idea, especially as we have been so caught up in the moment that we haven’t even taken one photo of him. Rich picks him up and we all smile for the camera, it’s official, we now have our first photo of the three of us together, a photo we will hold close forever and I could already imagine in printed on a canvass somewhere in our house.

We say our goodbyes and agree an earlier start tomorrow, to arrive just after he has finished his breakfast routine, before we then make a move home but sadly without the boy. A hug for all before leaving, which followed by an excited wave goodbye, literally until we were totally out of sight. It’s such a weird feeling knowing that you have now have a Son, you have met him, got on well and yet are about to drive home without him. What if something happens to him and I am not there, what if he cries in the night and needs comforting, I just know that I am going to find these ten days difficult now I know he is ours, I want to be there for him all the time. We get in the car and literally explode into conversation about how amazing it was and how beautiful he really is, even more so in real life. Rich was so chuffed with how today went and I could tell that he was on cloud nine, as he got quite a few cheeky giggles from the boy while playing and I couldn’t be any prouder today of our little family, even if he doesn’t yet live with us. Before we know it, we are home and literally have not stopped talking all the way, a total contrast from the nervous and tense drive down there. We get indoors and have a cuddle with Nutter, who can clearly tell that something special has happened today but he calms down quickly after being given one or maybe two of his favourite treats. It’s now time to get calling all of the family and send a few of the closest ones a copy of the first ever family photo, before we order ourselves a takeaway and get ourselves and early night, to be fully ready for a full day with our son, yes ‘OUR SON’ tomorrow.